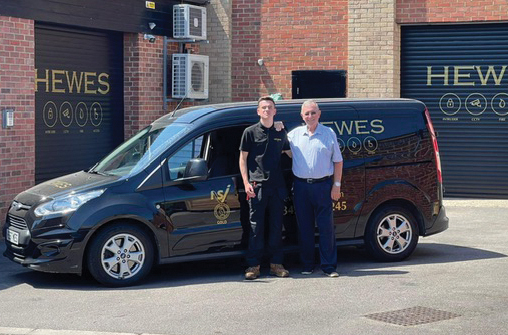 Richard Hewes with grandson Joshua now an apprentice with the company

Richard Hewes is the Chairman of Hewes Group in Essex and has 60 years in the sector under his belt. Areas of expertise for the business include intruder, CCTV, access control, fire and safes with accreditations such as NSI Gold and ISO 9001:2008. The company is also a member of NASIC, FPA, Essex Chamber of Commerce and BFC.

Did you always want to be a tradesman or were there other dream careers?

Leaving school I wanted to join the Met Police, but failed on my eyesight. Whilst waiting I had numerous jobs in the City starting as a post boy in a stockbrokers, not liking that, and in a short time I had three jobs in offices. But I wasn’t cut out for that. I had relations in the alarm industry so I started with AFA, who had just taken over Autocall, Sentinal, and Clarrion, in Wellington Street near Covent Garden when it was in use and I saw all the guys with their flat leather hats to carry all the produce on their heads. I was in AFA’s office due to the fact I came from an office environment, but I was not happy there and asked to work on the tools so they moved me to Parker Street.

You began as a locksmith then moved into installing alarms, what was the attraction?

When I began my career in the security industry we use to install contacted Chubb locks to control the setting of alarms silently in newsagents and off licences which operated out of normal hours. It was then using those locks that led me into fitting locks for other people. Then after many years I wanted to work for myself, so I use to go out knocking on doors to ask people if they wanted any locks fitted. It was during this time I became a Master Locksmith.

Can you remember what the early alarm installations were like?

There were no electronics, just hard wiring. On windows we use to fit tube and wiring, microswitches on doors and to fully protect a door, we used to wire the doors with fine wire and then cover the door with hardboard. In those days alarm companies made their own equipment; the first electronic technology that I can remember was an ultrasonic unit which was in a small black box that resembled a speaker. Then came a product from Ademco called a Contronic.