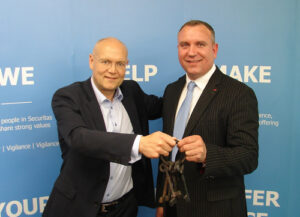 Shaun is an experienced leader with a proven track record in the security industry. After leaving the British Army in 1997 Shaun joined Chubb Security, where he spent 15 years, until it was acquired by Securitas in 2011.

Commenting on his new role, Shaun Kennedy said “Having spent over 20 years working in the security industry, I feel privileged to be taking over responsibility of the UK business at such an exciting time.”

Optex celebrates 40 years and looks ahead