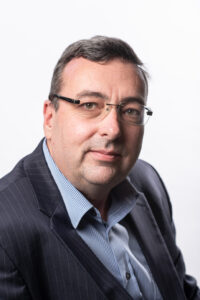 Safer Scotland has appointed Phil Bunting as its new Managing Director. Phil has been charged not only with accelerating the Paisley-based business’s expansion into the rest of the UK, but also breaking into European markets within his first year.

Working alongside Safer Scotland founder Ryan Clark, who steps up to the CEO role, Phil will oversee the Safer Security Group throughout the rest of the UK and Europe.

The company will continue to trade as Safer Scotland within Scotland and plans the launches, this year and next, of a range of new products. The immediate growth plan includes the doubling of turnover to £4m in the coming year, with £8m and £12m projected for the succeeding years. The company is also on the lookout for new premises of more than six times its existing square footage to accommodate its new ambitions.

Mr Clark said: “I am delighted that we have been able to attract Phil Bunting, one of the most sought-after leaders within the industry, and for good reason, to the role of Managing Director. Phil has an exceptional track record of leading innovation over decades and possesses an unrivalled knowledge, both of the sector and the ingredients for success. Key to our success will be ensuring that we are well prepared for our growth plans and Phil is the ideal addition to our business at this stage.”

Phil, originally from Sheffield, began his career as an electrical, electronic, and mechanical engineer. He founded his own company, Camwatch, in 1993 before selling it in 2014 to VPS Group, where he became Group Technology Director in charge of creating and deploying technology solutions across Europe.

He said: “I am pleased to be joining the team at the Safer Security Group. It is an amazing business which has done exceptionally well since it was established in 2016. I have worked with Ryan in my previous roles, and I have great respect for what he has achieved in such a short space of time. We are actively seeking new premises in Glasgow which will house production facilities as well as office space and I will divide my time between there and our new offices in Manchester and London.

“The most immediate priority will be the launch of our new Safer PODS product range, which will catalyse our growth.”