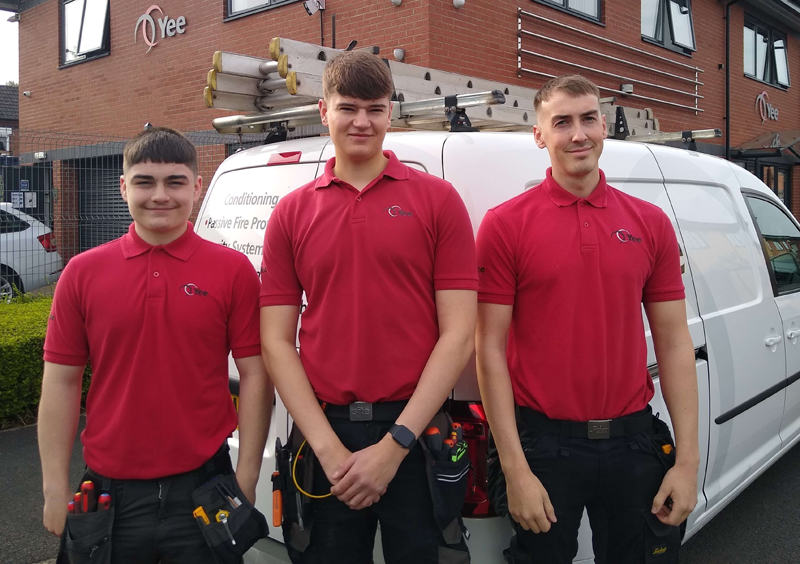 Yee Group has continued to strengthened its team with investment in skills and the next generation of young electricians.

Ross Rippin has completed his apprenticeship having studied and worked at Yee Group for four years and has just passed his AM2 exams with flying colours. Ross will admit that he didn’t always want to work in the sector but the idea of combining practical work (and a salary) with the experience of college was a big draw for him. Now fully qualified, he is looking forward to working independently across the spectrum of projects at Yee Group.  Ross said: “Each day is a different challenge – I love that, and helping customers is very satisfying.”

Another apprentice, Henry Bower-Khan, has been working at Yee Group while studying for his AM2 at college where he is currently in year 3. In addition to studying hard in the final half of his qualification; he is taking additional courses to enhance his skills even further.  Henry recently passed BAFE’s Theory and Practice of Servicing of portable fire extinguishers course which will enable him to support Yee Group’s fire safety team and adds another string to his bow. Henry said: “I’m doing a lot of studying at the moment, but it means I shall be able to work on lots of different kinds of projects at Yee Group and that makes life interesting.”

The most recent recruit is Edward Jesson who is at the very start of his career. As Yee Group’s newest apprentice, Edward said: “I am very excited about joining Yee Group. Ross, Henry and all of the team are supportive of my training and have gone out of their way to welcome me and help me settle into working life”.

Yee Group General Manager Jason Cooper joined as an apprentice and has since risen through the business.  Jason said: “All our staff commit their time to supporting our apprentices because they really do represent the future experts of our business.  As I have found – an apprenticeship is a great foundation for a fulfilling career”.

Surveillance for fast-fit and multi-site jobs