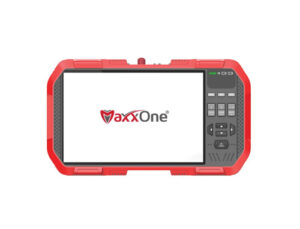 This is a combination test unit for both analogue and IP CCTV systems. It is supplied with the essential test leads for configuration and analysis of the majority of installations. Its touch-screen control allows selection of a wide range of functions such as camera testing and set up, wireless network signal strength monitoring and multi-meter functions all in one compact unit. Two Li-Ion batteries are installed in the unit accessible at each side of the case rear. These are model DT-BT3 with ratings of 7.4v 18.5 Wh. The manual states that these have no memory effect and can simply be recharged as required.

The unit is turned on or off by pressing the power button for more than two seconds. When turned on it displays the MaxxOne logo after approximately 8 seconds and then after 25 seconds the main menu appears.

At first power-up it is necessary to set the time and date to suit your current time zone. This is by way of controls on the Setup (System Settings) screen. Plus and Minus on-screen buttons are provided for each element of the time and date. Through this menu option, the auto power-off can be set and the Backlight level set along with inhibiting the keypad bleep tone. A Cancel and Save button are then used to set or ignore the changes. The backlight has a level from 1 to 10 with a default of 8. The Auto power-off is from 5 to 60 minutes in 5-minute steps or Disabled.

ONVIF Test – the Power & connections tab allows device IP settings to be entered. These are set for the two network ports and for the built-in Wi-Fi, as static addresses or DHCP. The first RJ45 port (Green) is up to 1Gb and can be used to identify the source voltage of PoE enabled connections, this reported 45.8V from a test switch port. This source can also be used to power the device and re-charges the internal batteries.

The second RJ45 port (Blue) is also 1Gb with PoE available of up to 25.5W. The display shows the output voltage of 48V and the power drawn from the port. PoE cameras can therefore be easily tested by directly connecting to the unit. For cameras requiring a 12v feed the power demand via the power jack lead will be shown. Both ports show the current download bandwidth if sending images and indicate any packet loss figure as a percentage with colour coded icons.

The Discover camera function will identify ONVIF compliant cameras on the local network segment along with manufacturer name. After entering the username and password a snapshot will be captured to show the field of view along with its details including resolution, frame rate, coding and model number.

The Analogue camera option accepts inputs from CVI, TVI and AHD formats and provides coax or 2-wire RS485 commands in a wide range of telemetry protocols and baud rates from 150 to 19,200.