Home Articles Apprenticeships are not just for teenagers!
Articles

Apprenticeships are not just for teenagers! 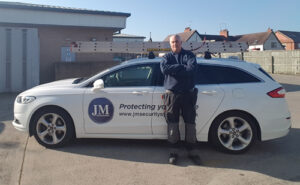 A former product development manager in Birmingham has taken on an apprenticeship at the age of 49 – proving it’s never too late to learn new skills.

Steve Young worked in the Epos/cashless payment sector since leaving school and worked through the ranks before being made product development manager. However, after 29 years at the same company, he was made redundant in April last year, forcing a career change.

It was thanks to a former colleague, who contacted him on the business networking website LinkedIn, that he was introduced to Birmingham-based JM Security Systems, who took him on as a trainee security installations engineer.

He is one of six apprentices going through three-year training programmes that will lead to nationally recognised qualifications for security systems engineers.

“I have learned, and I am still learning, all manner of new skills that are associated with the service and installation of Intruder and CCTV systems that JM supplies and maintains,” he said. “I’d never have thought about taking on an apprenticeship at my age, but it’s been great. I enjoy the independence and freedom my role as a security systems engineer gives me and I feel I can grow and achieve more as time goes on.”

JM Security Systems says the dynamics of its business has changed positively since taking on its first apprentice 15 months ago. Mary Vadaie, business development manager said: “As a company we are committed to the development of our staff and over the past couple of years, this has extended to taking on apprentices, who can learn on the job while earning a good salary that is far in excess of the minimum normally paid to learners.

“Like other companies in the security installation sector, we struggled to find well-qualified engineers, so training our own to our standard was the ideal solution. The learners not only bring their new knowledge into the workplace and apply it immediately, they also enjoy being mentored by our qualified staff.”

Two of the apprentices are on the Government-led Trailblazer Level 3 Fire, Emergency and Security Systems Technical course, which is backed by the SSAIB. The course requires them to attend college in Knutsford, for three days every quarter, and they have already reached a level that is advanced enough for them to have been provided with a company van.

Two other apprentices – one of whom joined the company with a CCTV background and the other with an IP background – have also been provided with company vehicles, while the remaining apprentices are still on the basic level training.

The company has also appointed an apprentice administrator, who is undertaking an 18-month team leader award.

“The managing director of JM Security Systems started off as an apprentice and worked his way up before starting the company twelve years ago,” said Mary. “It’s why he is so keen to bring on the next generation of engineers.”

Why did we launch the SiX installer event?

Are your installations GDPR compliant?

Three things to know about WDR…