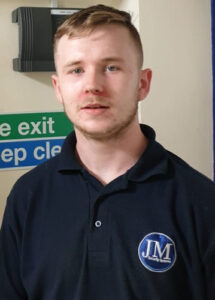 A Birmingham-based security systems company is celebrating after the first one among its apprentices completed all of his assessments with flying colours in 18 months. Chris Staunton, aged 20, started working at JM Security Systems in April this year after spending 18 months at another firm.

After being fast-tracked through his training by Skills for Security, Chris has now completed his Level 3 Fire, Emergency Systems and Security apprenticeship, attaining distinctions in two out of three modules.

It means that Chris is well on his way to being a fully qualified engineer and could also be presented with his own JM Security Systems work van in the autumn.

Mary Vadaie, business development manager, said: “We are really pleased that Chris has done so well in his assessments in half the usual time. After completing this first step on the career ladder, he has a bright future ahead of him in the security systems sector. We’re looking forward to helping him progress.”

Two of the company’s apprentices are on the Government-led Trailblazer Level 3 Fire, Emergency and Security Systems Technical course, which is backed by the SSAIB. They hope to complete their training in the autumn, while the remaining four apprentices are being mentored and supported by senior engineers, and being provided with both in-house training and external training.

The company has also appointed an apprentice administrator, who is undertaking an 18-month team leader award.