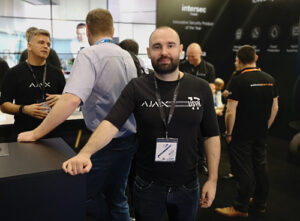 In the early months of 2019 you probably hadn’t heard much of Ajax Systems. The Ukrainian company had been doing well selling connected systems in Europe seeing sales multiply 80 times since 2015, but still wanted to expand its business farther afield. Following a $10million investment from U.S. private-equity firm Horizon Capital in March the founder and CEO Aleksandr Konotopskyi was able to set his sights on bringing the technology the UK.

In the June 2019 edition of PSI we reviewed the wireless alarm system and its peripherals and it did very well in the test. The system also had success at the Security & Fire Excellence Awards in 2017 and has made the finals in the PSI Premier Awards for 2019. It was a good timing therefore to catch up with Alex at IFSEC as the company began promoting to the UK market in earnest.

Why does the UK need another intruder option?

In our opinion the UK is the main market for professional security systems in Europe and from a numbers point of view it is one of the biggest in terms of intrusion technology. In the UK, people are really serious about security; people know how to use it and you have a well-established installer and monitoring community. The problem for any new player is the presence of such an established market, which has some very successful local intruder businesses already operating in it with proven systems and solutions.

We were not previously operating in the UK because we felt that the market was saturated and people were not necessarily looking for a new alternative at the time. However, from a technology point of view I felt that the UK intruder market was rather underdeveloped compared to other parts of Europe, favouring a conservative solution, and when we began showing our tech to installers they told us that it was very interesting and they would be keen to take the systems to end users. That is why we made a decision to set up a sales force on the ground as we certainly didn’t have a problem with the equipment – it was more a problem with the promotion. At this early stage we are moving well and we truly believe that our market share in the UK will grow quite quickly.

You didn’t just launch a simple system, you’ve introduced many items – are these the same as what you have out in Europe?

Yes they are the same. We don’t see intrusion as just intruder products we look at it from the angle of integrated systems and see applications in residential and small- to medium-sized businesses.

Our goal is to fulfil all of the requirements of the customer, not just in terms of the intruder side of security but also fire, flood/leakage, home automation, video verification etc. We see the approach of manufacturers like Apple with robust technology and a good user experience as the ideal roadmap for our company to succeed.