Hadrian Technology has come to the rescue of a scout group whose gardening project nearly had to be scrapped because of vandals. The 1st Burnmoor Scout Group in Fence Houses, near Houghton-le-Spring, recently installed a polytunnel at their headquarters to help youngsters and schoolchildren in the area learn more about nature and growing plants.

The project was partly funded by a grant from the National Lottery as scouts look to create an outdoor activity centre, complete with an archery range, climbing wall and garden. Children from nearby Woodlea Primary and Burnmoor School, many of whom are scouts at 1st Burnmoor, planted seeds, including hundreds of sunflowers. But the project was nearly wrecked when yobs broke into the garden and slashed parts of the tunnel in a late-night attack in June.

When Hadrian Technology heard about the vandalism, the company stepped forward to donate and install infrared cameras that will provide round-the-clock security to deter the vandals, improve safety and enable the garden to flourish for years to come.

The installation consisted of a suite of infrared cameras complemented by ten LED floodlights donated by one of their partners, Videcon. The scouts had started fundraising to meet the £4,000 cost of buying and installing CCTV equipment.

Gary Trotter, general manager at Hadrian Technology, said: “We saw the scouts’ appeal on Facebook as they were trying to raise money for security cameras. We are a Sunderland company but five members of staff, including myself, live in Houghton-le-Spring, and it is great to be able to give something back to our local community. The garden will now be secure and will give the volunteers and children peace of mind, deter the vandals, have a positive effect on their insurance premiums – and maybe even catch the perpetrators if they return.”

Group scout leader Allan Forster said they feared their dream of growing plants that will eventually be used in hanging baskets and displays at roundabouts and at landmarks in the local community was about to be shattered.

“My role is looking after a host of volunteers and, along with the children, they have put in weeks, days and hours into this project and when it was vandalised, it was like a slap in the face,” he said. “The youngsters went from being really excited about the project to down in the doldrums. The polytunnel was brand new and for someone to come and attempt to destroy it was very upsetting for everyone.

“We’re growing plants to take into the local community to improve the environment for everyone and thanks to Hadrian Technology the project can still go ahead.” 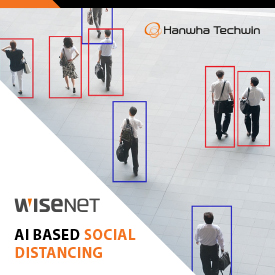